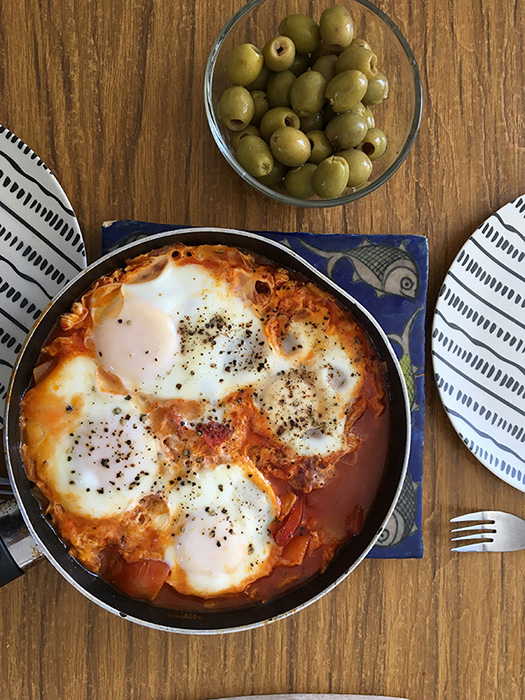 During Pesach we were in San Simon park on the second part of the holiday with friends and everyone was talking about what they made for Pesach this year for breakfast and during the week. The usual came up: Matzah Brie, Matzah with the Israeli Nutella Spread, the Pesach quiche I made (recipe to come!), and then…someone said..Shakshuka.

I felt defeat. How could I have forgotten to make Shakshuka during Pesach. A little bit spicy, lots of tomatoes, with soft matzah….chaval. What a shame. Next year I guess.

I couldn’t stop thinking about how I didn’t make Shakshuka during Pesach, so the next Friday morning that came along I had to fill the craving.

I didn’t plan to write about Shakshuka, but when I posted the picture above on Instagram I had some requests for the recipe.  So here is my version of Shakshuka…

*This recipe is for a small pan like the one above. Good for two people. Double the recipe with pleasure.

A pinch of spicy paprika (optional)

*Note: If my tomatoes are not very ripe, I usually add about 3-4 tbsp of water at the same time I add the tomato paste, to give the sauce more liquid. Don’t be afraid to also add a bit more water to the sauce before you add the eggs if it looks like the liquid is evaporating, so the sauce won’t burn while the eggs are cooking.

One Reply to “Shakshuka Kind of Morning (Recipe)”